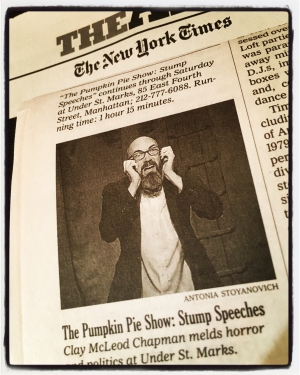 The New York Times came to check out this year's Pumpkin Pie Show: STUMP SPEECHES and had this to say:

“There is no shortage of comedians weighing in on the current election, but it often seems like the tools of satire are insufficient to comment on this absurd and exhausting campaign. Perhaps we need to look to a darker corner of the culture, where the punch lines end with bruises. The Pumpkin Pie Show: Stump Speeches,” the delightfully perverse, political-themed installment of the annual macabre merriment led by the writer and performer Clay McLeod Chapman, provides strong evidence that the bloody tools of Lovecraftian horror are effective this political season…

What makes Mr. Chapman — a screenwriter for the 2015 indie horror movie “The Boy” — such a skilled craftsman is he does not choose between subtle and heavy-handed or teasing suspense and gruesome shocks. He knows that in the best horror, the vulgar dances with the refined.”

“Possibly the most vomiting of any comic book published so far in 2017.”
— Real Comic Reviews