Pumpkin Pie in Time Out NY! 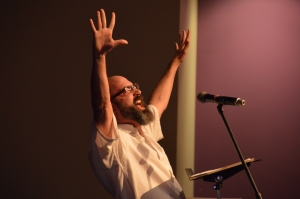 Helen Shaw at Time Out New York gave us a lovely send-off for the Pumpkin Pie Show:

“A sound rips out from the downtown theater scene, a scream of fear and denial and shock. But is there something else in it? Can you make out—a name? That name is Clay McLeod Chapman, and every storytelling junkie in New York has just realized something awful: After 20 years, Chapman is abdicating his reign as the king of narrative horror theater. His brilliant and hyperliterary thriller series, the Pumpkin Pie Show, performed without a set or costumes by the writer and select solo actors, has been blowing minds every fall since 1996. But Chapman has finally decided he’s done. “The city’s changing,” he says. “I can try to survive another 10 years or put it to bed.”

It feels like an untimely end. But happily, final frights are in store: a three-week run of Death to the Pumpkin Pie Show at Under St. Mark’s, where Chapman and his crew—including barnstorming dynamo Hanna Cheek—are reviving some of their favorite tales from the past two decades. On Thursdays, Cheek performs 2009’s Commencement, a Rashomon-style piece about a school shooting—a difficult, beautiful work that has little in common with the goofball escapism of other PPS shows. Fridays are devoted to 2014’s Seasick, a gross-out comedy featuring songs by Kyle Jarrow; Saturdays are a grab bag, with Cheek and Chapman drawing at random from a repertoire of roughly five dozen tales. Help yourselves to a few more slices of Pie, everybody! Before it’s all gone.”

You can read the profile at Time Out NY here.