Tales from Beyond the Pale launches nationwide! 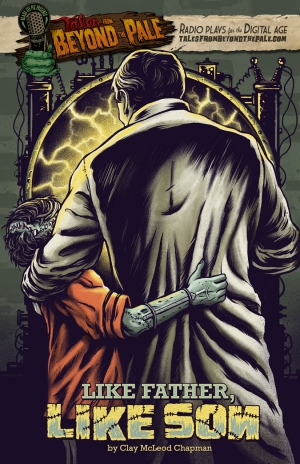 Glass Eye Pix, the maverick production company responsible for a vast slate of captivating independent genre movies including THE LAST WINTER, I SELL THE DEAD, THE HOUSE OF THE DEVIL, STAKE LAND and THE INNKEEPERS, has announced the wide release of the highly anticipated second season of their sensory rich genre audio dramas TALES FROM BEYOND THE PALE.

I was fortunate enough to have been invited to contribute a script for the series, writing a touching family story titled LIKE FATHER, LIKE SON. It features the voice talents of Larry Fessenden, Vincent D'Onfrio, and many others… It's a heartwarming tale about a father who will do anything to keep his family together. And I mean anything.

Season two of TALES FROM BEYOND THE PALE will be available for purchase/download at the TALES online store beginning Friday, September 13th for $2.99 per episode: http://www.talesfrombeyondthepale.com.

Last October, we actually staged these radio shows live at Dixon Place, bringing in a boat-load of actors like Sean Young, Mr. D’Onofrio, Mark Margolis, James LeGros, Michael Cerveris, Kate Lyn Sheil, Jonny Orsini and a whole lot more. It was pretty amazing to see live, but now Glass Eye has remastered the recordings and made them available for you to listen to in the safety of your own home!

The press picked up on the announcement. Here's what they have to say:

“Second Tales from Beyond the Pale Launches on Friday the 13th,” Fangoria: http://bit.ly/15czAdt

Here's the rundown of the entire second season. Check out this awesome roster of writer/directors:

THE CRUSH by Glenn McQuaid (I SELL THE DEAD, V/H/S)

DEAD AIR by Simon Barrett (YOU’RE NEXT, A HORRIBLE WAY TO DIE)

CAPER by Larry Fessenden (BENEATH, THE LAST WINTER, WENDIGO)