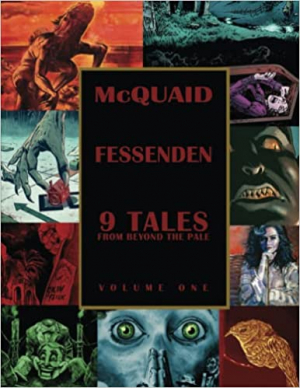 9 Tales from Beyond the Pale

For lovers of horror fiction, script writing, radio plays, or anyone who might want to put on a show… Glass Eye Pix presents 9 chilling scripts written by genre stalwarts Larry Fessenden and Glenn McQuaid for their award-winning series Tales from Beyond the Pale: “Radio Plays for a Digital Age.”

In the tradition of short horror scripts penned for The Twilight Zone and Alfred Hitchcock Presents, these 9 startling yarns feature demons, ghosts, war criminals, a haunted vineyard, a mysterious hole, two car wrecks, a drunk ventriloquist and his wicked dummy, vampires, film critics, and Jesus on a dinosaur.

This substantial volume offers the scripts as originally formatted and includes commentary on the work and the genre by essayists (and collaborators) Michael Gingold (Fangoria Magazine), April Snellings (Rue Morgue Magazine), Kim Newman (“Ano Dracula”) and Clay McLeod Chapman (“Whisper Down the Lane”); The book includes full color posters by Gary Pullin, Trevor Denham, Brian Level and Ashley Thorpe as well as a gallery of stills from the productions.

Since 2010, Tales from Beyond the Pale has been serving up lavishly produced half-hour audio dramas ranging in tone from the gently macabre to the genuinely gruesome. Produced and curated by filmmakers Fessenden (Depraved, The Last Winter, Habit) and McQuaid (I Sell the Dead, V/H/S), Tales has hosted numerous guest writers, directors and performers from the horror community.

Nearly 50 episodes are available at talesfrombeyondthepale.com or wherever you get your podcasts, with more on the way.